The woodland at Woll House is largely policy woods with a long history as a mixed conifer/broadleaved wood dating back until the middle of the 19th century. Many of the trees around the edge are over-mature beech with the occasional Silver Fir, Giant Redwood and Elm.

In the interior of the woodland there is some regeneration evident in areas of Norway Spruce and Grand Fir under-storey. Extensive rhododendron and laurel suggest the wood may have previously had sporting objectives. There is a large amount of Sycamore, mainly regeneration from cut stumps, a lot of which has rot around the rooting area.

The landform is Lowlands with gentle and strong complex slopes: slight to moderately rocky and soils are brown earths with drifts derived from Lower Paleozoic greywackes and shales.

The woodland is mainly comprised of intimate mixtures of two or more species with occasional small groups of single species. The exception to this is the larger area (1.0ha) of pure Sitka Spruce in compartment 1.

The vision for the woodland was that in addition to providing a financial return, it would provide year round recreational space for walkers and horse riders, improve biodiversity and provide shelter. The hope is the woodland will become a diverse and resilient mix of productive conifer and native broadleaf, managed by continuous cover through regular, planned and sustainable interventions.

500 tons of spruce was clear felled.

1900 tons of mixed conifers from the thinning operation.

Upon appointment in 2019, Forest Direct prepared a comprehensive woodland management plan, with a view to managing the bulk of the woodland on a continuous management basis. A shelter belt of Sitka spruce had reached maturity and needed to be clear felled. Forest Direct arranged the felling licence and worked closely with the Scottish Borders Council Highways team to define the transport strategy for removing timber from site.

Storm Arwen hit the Woll House woodlands shortly before the scheduled timber harvesting, and as such we were able to include windblow in our extraction strategy. The storm did severe damage to the Sitka spruce clearfell area but luckily only damaged the north eastern corner of the designated thinning area.

The woodland had not been actively managed for a number of years, which resulted in significant access challenges. Houses had been developed along the road where timber had previously been extracted. The solution was to use heavy duty, aluminum trackway panels to create a temporary 60m long track for 44 ton timber lorries, harvesting equipment and excavation machinery to access the woodlands over the front lawn of Woll House, causing minimal long term impact. Planning consent was received for forest road and timber transfer points, which will be left as a permanent feature for subsequent harvesting and woodland management. Forest Direct’s Harvesting Manager identified the trees to be removed, picking the poorer formed stems and the shallow crowned trees to allow the better trees room to develop. The team removed a high proportion of the sycamore as this was preventing light and heat from reaching the forest floor. Ground vegetation was quite light and it is hoped that regeneration will be seen within 3-4 years. It is also expected that the cut sycamore stems will regrow.

A second thinning and some group felling is proposed for 10 years time, depending on the success of the regeneration. If regeneration does not occur in the required amounts we will enhance the crop by planting other species such as oak to add to the crop diversity.

The clear felled spruce woodland will be replanted with native broad leaves including oak, birch, cherry, hawthorn and rowan. The brash will be chipped and the path network restored and enhanced for improved access.

There is a small population of deer which will be controlled if damage is caused to the regeneration. A local resident has been trapping grey squirrels and feeding red squirrels – six red squirrels have been seen in one site visit. We are hopeful that our work will improve the habitat for red squirrels and that numbers will increase. 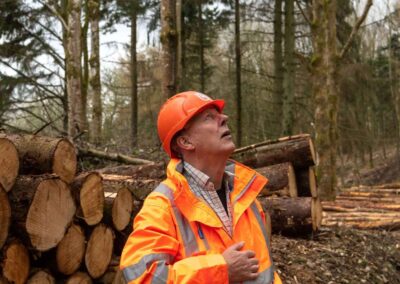 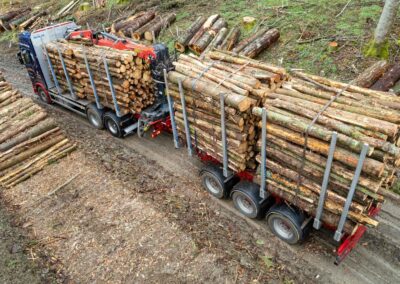 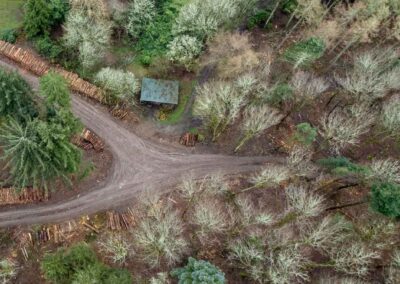 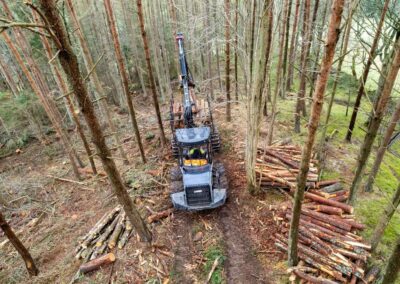